In this guide, you're going to learn how to create an infrastructure in AWS to host react application - in fact, the steps would be same for all frameworks which ultimately generate static websites - such as Angular, Vue etc.. Then, we're going to learn about how to set up CI/CD (Continuous Integration / Continuous Deployment) pipeline to integrate and deploy your changes automatically once you check-in the changes in Github repository.

AWS S3 service has a capability to host static website. So, the infrastructure is pretty simple - it is just a s3 bucket with simple configuration to make the bucket to behave like a website.

For this, we're going to AWS CDK - an Infrastructure as Code (IaC) tool - developed and maintained by AWS. If you're new to AWS CDK - I strongly suggest you to read this guide to understand AWS CDK. No problem, I can wait.

Having understood the basics of AWS CDK - let us create AWS CDK app using typescript. First, create a new directory. AWS CDK CLI requires to have an empty directory for it to create CDK app. Then, you can execute the command cdk init app to create a new CDK app.

CDK app would have created an empty stack - with an example resource for the queue. Now, we're going to create a bucket in that stack

In the above Bucket construct, we're passing 3 parameters:

bucketName - as the name implies, this would be the name of the bucket created

websiteIndexDocument - When you access the dynamically generated domain - this contents of the file mentioned here would be displayed. As of now, we want index.html to be displayed when users access the website.

Please note that we've not created this index.html till now. Ultimately, this index.html would be generated by building react application.  Our infrastructure setup doesn't care whether it is a react app or angular app. All it needs is a HTML file by name index.html .

Create a directory by name website at root level of the CDK app and create a simple HTML file by name index.html . As mentioned earlier, the contents of the file doesn't matter.

Then, we're doing to deploy the contents of website directory(just index.html in our case) into the bucket created earlier.

Below is the complete contents of the stack

I hope you've already bootstrapped CDK app - as explained in this article. If not, please execute below command

Execute the below command to deploy the CDK app

CDK app will ask for necessary permissions and roles to be created for it to deploy. Once it is deployed, you'll be notified in terminal. Then, you can log-in to the AWS console to see the changes.

When you visit, you could see the Publicly accessible  bucket as shown below

Execute below command to create react app (I'm using TypeScript). The name of the react app is github-actions-react-app and using npm as package manager. Of course, you can use yarn if you're more familiar with it.

When you run the application, you'll see below page.

Below is the pictorial representation for the same.

We're going to create couple of workflows - one would run when pull_request is created and another the changes are merged into master.

When a pull request is raised, we want to checkout code, install packages, run tests and build react app.

Below is the workflow created for the same.

Some things to note in above workflow:

When you create PR, this workflow will be executed and you can see that check in Github console as shown below

When PR is reviewed and approved, the changes are merged into master. This react application will be deployed to AWS S3 bucket that we've created earlier during infrastructure setup.

When you notice the difference between pull_request workflow and deploy workflow is just deployment step. All other previous steps (checkout, install, test and build) will happen in this workflow as well.

To deploy react app in AWS, github workflows should have permission to deploy in AWS. One of the option is to store AWS access key and AWS secret key is github secrets. But, generally, it is not recommended to store keys in long term.

So, we're going to use Github OIDC connect. The idea is to configure AWS to accept Github as Identity provider and create a role. I've written a  step by step guide on how to configure Github OIDC here. Please read that article.

Once you configured Identity Provider and created role, you can create deploy workflow - as shown below. The changes are highlighted in bold.

Things to note in this deploy workflow:

When you merge the PR, the build & deploy workflow will run and deploy the code. You can see the updated contents of the bucket in AWS S3 console. 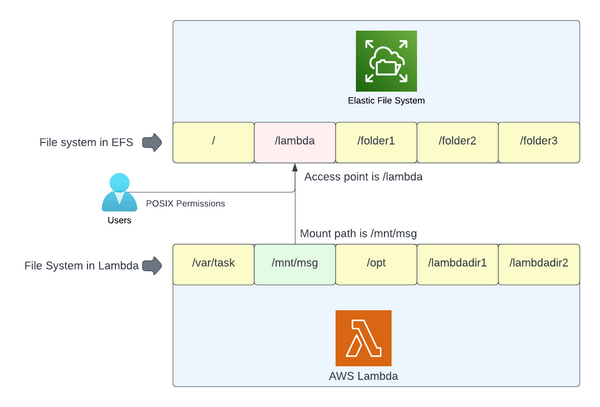 In this tutorial, we're going to learn about how to use Elastic File System (EFS) with AWS Lambda. We'll be using AWS CDK in this guide. It's an open source software development framework that lets you define cloud infrastructure. AWS CDK supports many languages including TypeScript, Python, C#, Java and

In this step-by-step tutorial, you'll learn about why we need Lambda layer and how to create one. And, you'll also learn about how to use a lambda layer inside a lambda function. Before discussing about lambda layers - let us discuss about the problem it solves. Why do we need